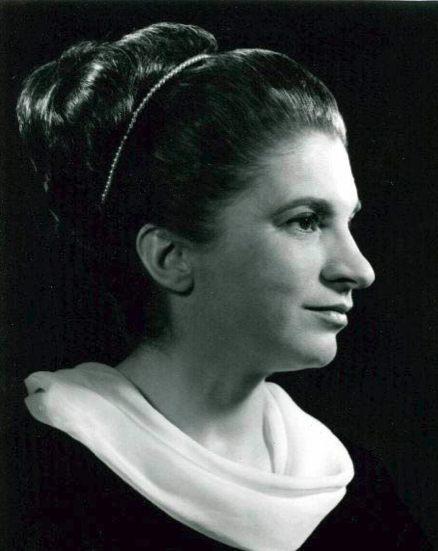 “Everybody has a beautiful voice. You just have to learn how to use it!” – Jo Estill

Josephine Antoinette Vadala was an American singer, singing voice specialist, and researcher. She was born on April 25, 1921, in Donora, Pennsylvania, USA. In her teens and early ’20s, Jo sang on the radio in Hollywood for the CBS radio network. In 1948, she married Thomas Estill, and in 1949 they had a daughter, Alice. Soon after, Jo embarked on a European solo concert tour in The Hague, Amsterdam, Copenhagen, Oslo, London, Zurich, Geneva, and Paris.

In 1969 Jo earned a BA in Liberal Arts from Colorado College, where she was also on the voice faculty. She received a MA in Music Education in 1971 from Case Western Reserve University in Cleveland, Ohio. It was during this time that Jo minored in Speech and Hearing was introduced to voice science. In 1984, Jo graduated with a Ph.D. from the City University of New York.

Jo received an Honorary Doctorate, Doctor of Letters LittD, from the University of East Anglia. She was also named Honorary Associate of the Royal Academy of Music. In 2007, Jo was honored in Boulder, Colorado, at a gala performance by the ARS Nova Singers, an exceptional choir trained in the Estill Voice Model. In her later years, Jo resided in Santa Rosa, CA. She traveled internationally, giving seminars, and stayed active in voice research. Jo Estill died on December 9, 2010, in Santa Rosa, CA, of natural causes.

Living
Associate professor of voice and director of musical theatre at Shenandoah Conservatory of Shenandoah University; Artistic director of the Contemporary Commercial Music Vocal Pedagogy Institute; Secretary of the Musical Theatre Educator’s Alliance and past secretary of the Pan-American Vocology Association.
Matt Edwards is one of the leading voice teachers for commercial and musical theatre styles in the United States. He is currently Associate Professor of Voice and Coordinator of Musical...
Read More

Featured, Historical
Voice Researcher, Author, Singer
“He felt that we could best serve our art and our profession by inclusiveness, not exclusiveness, a viewpoint he defended frequently and with eloquence.” – Karl Trump William Vennard was...
Read More

Historical
Pioneering researcher, author, and teacher of vocal pedagogy
“You must know the physiology behind the art. All the ‘pink clouds’ in the world won’t help you move through the passaggio.” – Richard Miller Born April 9th, 1926, Richard...
Read More
View More
Join Our Mailing List